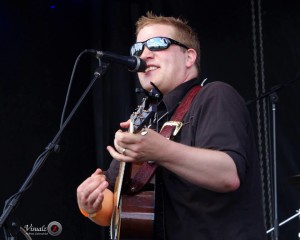 Born and raised in Grande Prairie, Alberta. In 2002 Andrew moved to Lethbridge Alberta to study music and education at the University of Lethbridge. During this time he ended up being the energetic frontman for a very popular local group called The Turncoats. This group recorded two discs (Bloodrunnin, Teeth Like A Chainsaw) and played at venues and festivals all over Western Canada including The South Country Fair, The Spectrum Festival, the Lethbridge Folk Club, the Kispiox Valley Music Festival, the Peace Starts at Home Festival, the Ironwood Stage and Grill, Better Than Freds, Broken City, and The Slice Bar and Grill.

In 2006 Andrew won best performance at the Calgary Folk Festival Songwriting Contest with his song ‘Artillery’.

In 2007 Andrew got second place in the Calgary Folk Festival Songwriting Contest for his song ‘River of Tears’.

In 2007 he graduated from the University of Lethbridge with a B.Ed/B.Mus and headed off to Japan where he is currently working as an English/Culture teacher with the JET Programme. He has continued an active performance schedule there and has recently been hard at work on his new album ’13 Birds of Prey’, a project recorded in both Canadian and Japanese studios, that will be released at the end of May 2009.