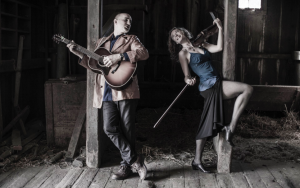 Meeting via a chance YouTube sighting and fueled by rare musical chemistry, eclectic Roots-Folk songwriters Dan Frechette, guitar/vocals, and Laurel Thomsen, violin/vocals, prove that musical magic is not only possible, but as described by The Monterey Herald, “a match made in heaven”. Lyrically refreshing and musically diverse, over the past three years this Canadian-American duo has toured extensively throughout the U.S. and Canada, releasing two albums of their diverse and uplifting original material. Dan and Laurel take to the stage with exuberance, and as a concert reviewer in Tappen, British Columbia wrote, with “their energy, winsome personalities, and toe tapping rhythms, keep audiences engaged with every song”.

With the duo’s international attention growing, ovations abound. As described by Brandie Michelle for the Medicine Hat Zine, Dan and Laurel share music that is “thoughtful, well composed and cleanly performed…” adding that “they are both extremely skilled musicians and their pairing of contrasting styles is the closest thing to perfection in a musical duo”. Arlene Davidson, a writer for The Clipper in Lac Du Bonnet, Manitoba remarked on their “perfectly blended vocal harmonies” after taking in the duo at the Fire n Water Festival.

Since the duo played their first concert together in early 2013, they have performed close to 300 concerts ranging from house shows to festivals and theaters. Highlights have included a twelve date Home Routes tour of northern British Columbia, opening for The Wailin’ Jennys at a sold out theater in Grass Valley, the definitive Russ & Julie’s House Concert in Los Angeles, The Medicine Hat Folk Club’s Tongue On The Post music series, the oldest theater in Western Canada (complete with resident ghosts), the Eastern Manitoba Concert Association (EMCA) series, and official showcases at the FAR-West Conference in 2014. Dan and Laurel will be debuting in New England in November 2015 with showcases at the NERFA conference, and in Spring 2016 they are looking forward to headlining the Listening Room Festival in Florida and returning to the South.

Dan Frechette, Canadian entertainer, acoustic guitarist, uncanny impressionist, and prolific singer-songwriter, is a musical force. With over 1300 songs to his name across a impressive range of acoustic genres, including the The Duhks’ hit singles “The Mists of Down Below” and “You Don’t See It”, was signed to EMI publishing at 17. Since then he has released over 25 albums of original material, and has been performing high-energy, soulful concerts throughout North America and Europe since 1992. Dan’s prolific output, iconic voice, and under the radar career path have led many luminaries to sing his songs and share their stages, including Dar Williams, Richard Thompson, and Ron Sexsmith. Ismaila Alfa on CBC Radio said “Dan Frechette has never written a song I don’t like.” Dan has played most major folk festivals, including the Winnipeg, Edmonton, and Stan Rogers Festivals and the Suwanee Springfest, and is considered one of Canada’s best on acoustic guitar and harmonica, inspiring many up-and-coming singer-songwriters now touring internationally. ‘Sing Out!’ magazine called Dan “one of the most talented singer-songwriters I’ve heard in a long time.”

Laurel Thomsen, American genre-bending violinist, composer, and respected educator, has performed classically and for a variety of California Bay Area bands and artists since 1998. Penguin Eggs Magazine called her “a terrific violinist and accompanist”. With a rich and expressive violin tone and an interpretive style that can both rock a solo or add backup texture and groove, Laurel is frequently sought for her ability to add depth and emotion to diverse styles of music. Dubbed the “Hookmeister” by one recording engineer, her knack for creating infectious melodies has saved more than one person’s song from the chopping block. Also a songwriter and emerging singer with a “remarkable singing voice” as noted by Dennis Taylor of The Monterey Herald, Laurel enjoys exploring universal topics and the deeper questions of life through song. The host of the popular Violin Geek Podcast since 2010, the author of two multi-media guides to string playing technique, a longtime Strings magazine contributor, and since 1996, a dedicated private, Skype, and workshop lessons instructor to violin, viola, and fiddle students around the world, Laurel is passionate about not only sharing her music on stage, but helping others find their musical path.

Sharing the booking, marketing, and management duties while building a 150 song repertoire of original music and filling their calendar with staggering 40 date tours, it’s clear that Dan and Laurel are driven to create, play, and perform and are quickly finding their niche on the North American folk circuit. However, hard work and dedication is only one facet of Dan and Laurel; as those who meet and hear them soon discover, “there is something incredibly romantic about these two and the way that their love story is told through their music” (Brandie Michelle, Medicine Hat Zine)

With broad influences ranging from Folk, Classical, Old Time and Celtic, to Gospel, Jazz, Vintage Country, Rock N’ Roll, Blues and Bluegrass, Dan and Laurel flow seamlessly through genres, tempos, stories, and moods, embodying each style with virtuosic command and keeping music fans on the edge of their seats. The enjoyment is palpable.